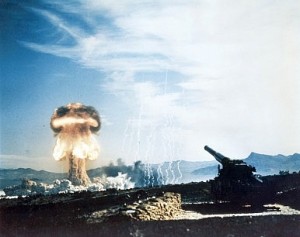 This is the first concrete explanation from a senior Pakistani official on how Islamabad plans to deal with India’s so called cold-start doctrine, now re-named the pro-active strategy.

It is also a rare explanation of Pakistan’s decision to make tactical nuclear weapons to deal with the possible threat of Indian aggression.

Briefing the Pakistani media on Prime Minister Nawaz Sharif’s visit to Washington, Chaudhary also said that Pakistan would not sign any nuclear deal with the United States during the visit.

National interest a priority: PM
Earlier, Prime Minister Nawaz Sharif on Monday reaffirmed that Pakistan’s national interests will be prioritised during his upcoming visit to the United States (US).

The premier was speaking to media personnel in London, en route the US.

“We will protect the national interests of Pakistan during my meetings with US leadership,” said the prime minister.

While responding to a question on recent reports in US media regarding Pakistan’s nuclear arsenal, and plans to limit it, the premier said: “We should not forget who the prime minister was in 1999 when we became a nuclear power.”

Prime Minister Nawaz Sharif also stated that concrete evidence regarding India’s sponsoring of terrorism has been forwarded to relevant people and organisations, and expressed hope that Pakistan’s concerns would be addressed.

The premier added that the incumbent government would end the power crisis facing the country before the next general elections.

Prime Minister Nawaz Sharif also expressed his disappointment at the attitude shown by the opposing Pakistan Tehreek-i-Insaf (PTI) and their repeated claims of rigging following the by-elections recently held in Punjab.

Yesterday, the Foreign Office had clarified that no “deal” is being discussed between Pakistan and the United States.

According to earlier media reports, US has been weighing options to sign a civil nuclear deal with Pakistan.

A report in The Washington Post had claimed that the US is exploring an option that could pave the way for a civil nuclear deal with Pakistan like the one concluded with India in 2005.

Quote of The Day :

" The three mantras of success are: a clean heart, an open mind and a positive attitude to sustain every situation!"